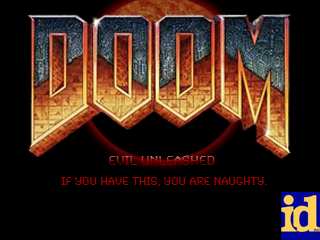 Doom: Evil Unleashed is a mod aiming to accurately recreate the original Doom design document, A.K.A. the 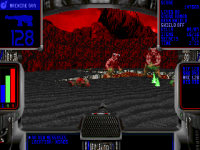 The mod aims to accurately recreate the Doom Bible. In the image, the final fight against the Bruiser Brothers of episode 1.

Evil Unleashed features a similar gameplay to traditional Doom, albeit different in some key aspects. Since the mod's goal is to accurately recreate the Doom Bible, the gameplay tends to be mostly oriented to the Survival-Horror genre rather than Fast Action, although some levels play very similar to The Ultimate Doom, packing heavy action against hordes of monsters while having plenty of weaponry available.

One of the key aspects of Doom: Evil Unleashed is that it allows the player to choose between four different player characters. All of the characters have different abilities, weaknesses and resistances, and some weapons work differently for them. Also, unlike traditional Doom, the levels are not arranged in a linear fashion, but the player is free to explore the maps by going and returning from another levels. There are intermission screens that show where the player is in the overworld.

This mod is being developed with multiplayer in mind, allowing for Cooperative and Deathmatch modes, meaning that up to 4 players can be connected at the same time. All weapons have been specially tested to be balanced during DeathMatch, and for allowing each player character to complete the game successfully in Single and Cooperative modes.

The game also features in-game cutscenes thanks to the camera effects provided by ZDoom, and, for the intro and ending movies, slideshows much like Strife are shown.

The characters are the following:

Some powerups have been carried over from Doom and modified to suit the atmosphere and gameplay:

Some new powerups have been added to the game. These include: