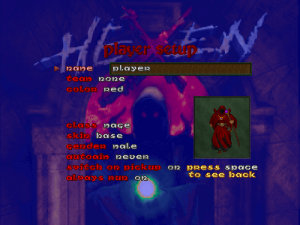 The player setup in Hexen.

The player setup regroups the different options that relate to player appearance, such as the displayed name, gender, and skin, the choice of team, as well as personal preferences, such as autoaim strength and whether "always run" is on or off. Its MENUDEF name is PlayerMenu and it can be summoned with the console command menu_player.

Note: Although the player setup allows to change class, such changes do not take effect instantly but require the player to respawn. Furthermore, if the class is changed outside of a game, it will have no effect as the class selection menu, even if not displayed, will override it.

name
This is your player's name. This is only really useful in a multiplayer game, but it can also be set for single player.

team
This is the team that your player belongs to. It is only meaningful during deathmatch games. There are eight predefined teams available, though this can be changed with a custom TEAMINFO.

color
This is your player's color. The default varies depending on which game you are playing. This is overridden by a valid value for colorset. Red, green, and blue sliders appear below when using a custom color; they are hidden otherwise.

The red component for a custom color. This slider only appears if the player is using a "Custom" color.

The green component for a custom color. This slider only appears if the player is using a "Custom" color.

The blue component for a custom color. This slider only appears if the player is using a "Custom" color.

playerclass
The player class used by the player. The list of choices depends on which player classes are available, as determined by the GameInfo definition of MAPINFO and possibly certain old KEYCONF commands.

skin
This is your player's skin. "Base" is the name of the regular skin for the selected player class and is always available. Additional skins are contained in wad files that you either load with -file at the command line or autoload using the ini or skins directory.

gender
This is the gender of your player. Valid values are "male", "female", "neutral" and "object". Anything else will be treated as male. When you die, certain messages will be altered to reflect the gender selected here. Unfortunately, ZDoom does not provide any additional player sounds, so this will not affect your character's voice in any of the supported games unless you provide your own sounds. (Default characters are male in all base games except Harmony.)

autoaim
This represents the intensity of vertical autoaim, in degrees.

neverswitchonpickup
When on, you will not automatically switch to a new weapon when you pick one up.

cl_run
When on, the game will always treat movement commands as if +speed is active.