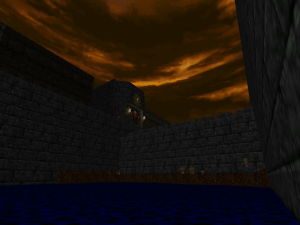 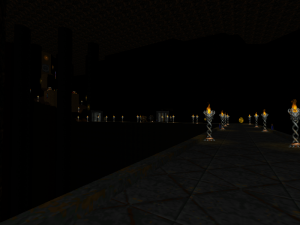 The Nadir is a short three-level hub for Hexen, using a few GZDoom features, notably 3D floors. A sorcerer known as the Reanimator is creating a legion of monsters and you are the one to put an end to his plot. To go reach him, you will have to explore a network of impossibly large caverns, find the keys, defeat the Reanimator's Heresiarch lieutenant, go through his castle, and fight him in his temple. 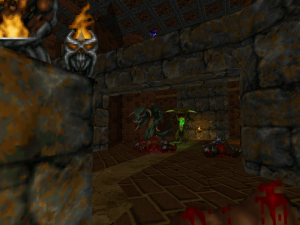 The bad guy's minions include a few monsters from the Realm 667 bestiary, notably the Demon Eclipse death knights which must be fought in close quarters (using the porkelators against them when they have their shield down is a good idea) and evil knights which clash badly with the rest of the graphics with their sprites taken from

Dungeon Keeper. To fight them and the rest, you will be able to use two additional weapons, a staff and a crossbow, which have their own ammo pools. The staff uses purple mana and is slow, but devastating as long as it is charged. When out of mana, it can still be used, but is mostly pointless as it will not have any advantage over the sapphire wand, mace of contrition or spiked gauntlets you started with. The crossbow uses magical arrows. Contrarily to the Heretic weapon from which it is derived, it throws only one projectile, but it is faster and more efficient — you can often gib ettins with it.

One should be warned that this mod suffers from a few mapping errors. The hall of mirrors effect can be seen in a couple places where lowering sectors reveal missing textures, and the door to the Heresiarch's hall in the Nadir can only be opened once from each side, potentially locking you out and preventing further progression without a cheat. A possible solution is to type in the console the following command: summon artipoisonbag 0 0 11 118 16 — picking that flechette up will open the door and leave it open, allowing to continue without having to go in noclip mode.