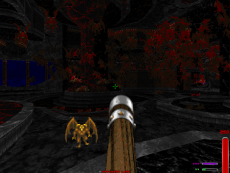 A screen of gameplay in ZDoom Wars. The selected monster is shown near the player's hands.

ZDoom Wars is inspired by an old Doom Legacy wad, DoomWars by Martin Collberg (creator of the CajunBot), in which the player punched to summon monsters in front of them. ZDoom Wars takes this concept and expands it greatly, adding the cast of Heretic, Hexen, Strife, Chex Quest, and Virus. It had been stated that more factions would be added in due time, but the project has since been stopped.

In ZDoom Wars, the player has constantly regenerating health and mana, which is used to summon their minions for varying costs. There are two types of mana: normal mana, and Hero mana, which regenerates at 1/4 the rate of normal mana, but is much more valuable, as it can be used to buy more powerful units. Each player has several spawners, each showcasing a monster. Change weapons to switch through the monsters available, and click to summon them. Note that you have to have enough room around you and in front of you to summon the monster. A projectile fires from you upon clicking, spawning the monster on impact. Players are also able to upgrade certain monsters, referred to as Retro-fitting, or can buy them pre-upgraded, and each side has a special ability.

Though the player has quite a bit of health, they have no way to directly defend themselves, relying on their monsters. Luckily, players have been given a very high jump, are invulnerable to some monster's blast damage, and smaller monsters are able to be pushed aside. Some maps may contain hazards, which often cannot affect Hero Units, such as the Cyberdemon or Korax.

The statistics of all the monsters have been altered in order to better balance out the gameplay experience. The unique enemies of each game ensure varied battles, and the map-pack made for the wad very much heightens the experience.

There are excessive manuals available for not only the wad itself, but each individual faction in detail, as well as a strategy guide that is a modified version of Sun Tzu's The Art of War.

As of October 18, 2011, Repo Man along has taken over duties in updating the original ZDoom Wars and has released a version known as ZDoom Wars 1. There is a development blog for this version that can be found here.