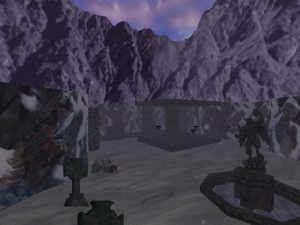 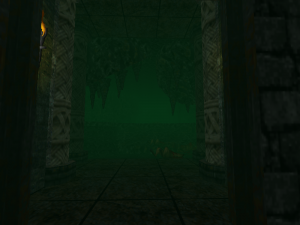 The air in this cave is surprisingly safe to breathe, despite its look.

Necrosis is a nine-map levelset for Hexen. Contrarily to typical Hexen gameplay, they are played sequentially like in Heretic, though there is no intermission tally screen between each. Another departure from classical Hexen gameplay is the absence of level scripting.

As typical of the author's work, all levels make heavy use of the "fade" map definition property, which often clashes with the fogless sky textures.

The story takes place long after the death of the heroes who killed Korax. But a sinister force is raising the dead, including you. As a hero, though, you retain your own free will and decide to investigate. The land has changed in the intervening years, and you will pick up new and old weapons and face new and old foes before you can cure Cronos of its necrosis. 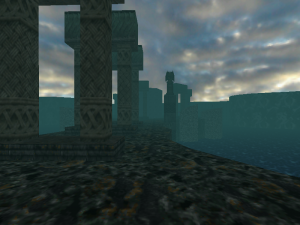 Other than the additions to the monster roster, such as black-robed cultists and satyr archers, the old Hexen enemies have been changed a bit. The slaughtaurs no longer use their shields for defense when in pain, and can therefore be killed much faster. Ettins are replaced by faster ghouls. Giant boss versions of the wendigo and chaos serpent appear, along with several Heretic enemies (with some surprises) and the Demon Eclipse death knights. To fight them, you have new weapons: the starting weapons are replaced for the cleric and the mage (with a bow and a different wand, respectively), and additional blue and green mana weapons are available for all classes, providing them all with some measure of rapid ranged fire and thereby bringing the gameplay closer to the Doom and Heretic model. To top it off, all weapons now have powered-up modes, if you find the tomes of power, and you can also find a triple-damage item (trident sigil) and a quarter-damage item (rune of protection). Using them wisely is recommended; it may be necessary to hoard them until they are needed in a later level. To complete the gameplay tweaks, your maximum health varies with the class now (120 for the fighter, 100 for the cleric, 80 for the mage), and your movements are crippled if your health falls below 40.

Although the maps are generally solid, the last couple of maps before the final map lacked some more playtesting polish: Spirit Keep can be broken, with no possibility of getting unstuck without cheating; and Stronghold of Fire has a passage that is near impossible if you did not arrive in the level with an extra rune of protection or icon of the defender, as to progress you have to jump twice in lava, taking falling damage while doing so. The first intermission text screen could have used some proofreading as well.