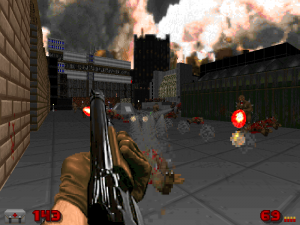 TcA's famous map, "The Matrix Has You" 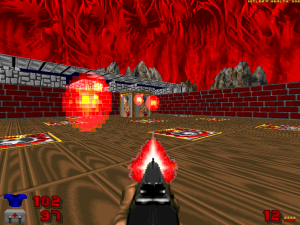 Show that nazi bastard who's boss!

TurboCharged ARCADE! is a different approach to the world of Doom's gameplay, taking an arcade-like style. Instead of being confined to a certain set of maps in a single order, TcA will allow the player to select his own path through each of the levels. Along with this, most maps will serve up a different style of gameplay. While some maps are pure shoot-em-up, others include puzzles, insane stylish moves, and some of the most unconventional ideas ever to grace your ZDoom installation. The wad is intended to be funny as hell, with a few beta testers reported as almost dying from laughter. On top of all this, the core aspect of the gameplay has been changed thanks to the inclusion of a 2x speed patch. Everything now runs at twice the speed; monsters, weapons, you name it!

Due to the sheer size of the planned wad (a hundred-plus maps!), TurboCharged ARCADE! is now in Open Development. Individuals may create and submit maps, and if good enough, will see their way into the final wad. Visit the official TcA Forums to see how you can get involved!

TCA received one of the 13th Cacowards. Well, not exactly. Linguica hijacked the "Mockaward" segment (dedicated to How Not To Be Seen) to praise it. 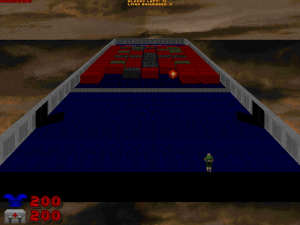 You'd better have some balls of steel for this one...

As an early Christmas present, the demo of TurboCharged ARCADE! was released alongside Zen Dynamics into the /idgames archive. It features eight levels, which is only a small sample of what is planned but still shows a great sample of what's planned. In the demo, you can take a journey to foreign hellish landscapes, dive across rooftops whilst dodging bullets in slow motion, escape from insanely overpopulated prisons, and face off against the devilish Adolf Hitler in a showdown for the ages... all in whatever sequence you desire!

The demo is definately worth checking out, even earning the Mockaward in Doomworld's 13th Annual Cacowards in 2006. The official download link can be found here. What the devil are you waiting for? Get your ass to Mars! Episode 2 is available, too!

A few months prior to TcA's demo release, a teaser map entitled "Balls of Steel" was released on the ZDoom forums. Although an episode malfuncion prevented its inclusion in the actual demo, it is still very much worth checking out. Fans of Arkanoid, unite in the Balls of Steel thread! 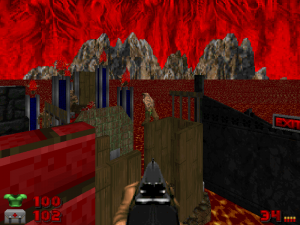 A claustrophobic nightmare, "Congestion 1337" will test all your movement skills.

So, what about this odd gameplay system? Well, each map will be selectable in any order and will have completely different playstyles. Some maps will be complete shoot-em-ups, while others posess unconventional arcade styles (such as side-scrolling madness) or feature crazy moves (ie, "The Matrix Has You"). To compensate for the insane amount of maps, most levels will be short, sharp shocks, each one a blast to play. Difficulty will vary between maps, so in case a certain map bugs you like crazy, you can come back to it later or even skip it entirely. Hopefully this will offer a huge break from standard Doom-ish gameplay.

A planned addition is a specialized ACS menu system that allows selection of any level at any time (with some guidelines below) However, this in turn will require a boatload of coding as well as some special graphics that hopefully a certain someone will do eventually. The demo's episode menu is currently a hack and will certainly be replaced. The menu will also show some short information about the current map and will be returned to after each map. The menu will keep track of finished/unfinished levels, total time, and individual times for each level, for a bit of competition and the like. Although this will be tough to pull off, hopefully it'll be pretty cool anyway. 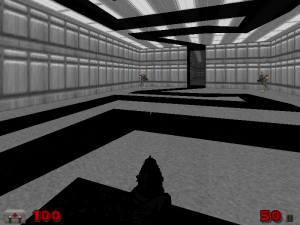 Remember Quake 3's Tier system? You could play the maps in any order, but you had to beat all of them before moving onto the next one. Well, a similar approach is being considered for TcA. All 100 maps will be arranged in a 10x10 grid, with each column of 10 being a different tier. After beating at least five levels in one tier, the next is unlocked while still allowing all the previous level to be played. So technically, you only need to play 50 levels to complete the wad, the real challenge comes from conquering all hundred. Combined with a time-record scoring system, this will allow players to compare times and compete to see who the best TcA-runner is! Well, in theory at least.

Along with this, a "category" system is present. In each horizontal row, a different "category" of levels exists. One row will be all shooting-type levels, while another may be physical-type challenge levels. In addition, for each "category" (one full row) completed fully, a special "Master Level" for said category is unlocked. The "Master Levels" are much harder and more dangerous than anything before it. Once all ten "Master Levels" are conquered, the super-dangerous grand-finale map is unlocked. Beat it and you can crown yourself Champion of the ARCADE!

For more detailed information on the project and how you can contribue, visit the official TcA Development Forums. Any suggestions, ideas, or comments would be greatly appreciated, so if you've got any either register on the TcA boards or send Xaser a private message on the ZDoom forums. As for now, just wish the TurboCharged ARCADE! team a boatload of good luck so hopefully this insanely ambitious project will finally see the light of day!