The Ultimate Torment and Torture

For more information on this article, visit the The Ultimate Torment and Torture page on the Doom Wiki. 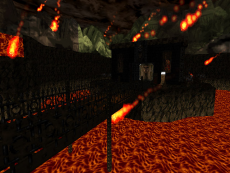 A screenshot of Ultimate Torment & Torture

The Ultimate Torment & Torture is a WAD created by Tormentor667 which is a collection of his previous wads (TNT 1 to 4) but revamped for a more enjoyable experience. It enhances former levels in the series as well as finishes off the storyline. TUTNT requires GZDoom.

TUTNT was received very well by fans, especially by fans of the original collection of the WAD. The polished maps fixed the issues people had with the originals (mainly gameplay complaints) and the enhanced levels were much appreciated. Many say that the WAD was even better than the long awaited Knee-Deep in ZDoom. The WAD has received little complaints other than a few nags about the unnecessary player classes and Duke Nukem-like Voice comments.

Since the levels in the WAD are quite large and elaborate, and makes extensive use of stacked sectors and other effects, it requires a fairly powerful system to run. Recommendations can be found on the homepage.

Note: ZDoom can run the mod, but certain areas will be missing bridges or platforms needed to progress, and the end credit sequence crashes ZDoom. GZDoom has a software renderer, and it does reduce the system requirements pretty dramatically, so it's best to try that first.