For more information on this article, visit the Knee-Deep in ZDoom page on the Doom Wiki. 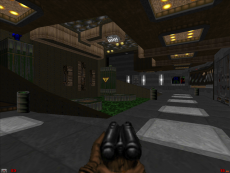 A Screenshot of KDiZD

The original intent of the project was to retell Doom's first episode's story with the modern enhancements ZDoom has to offer, with the justification that id software may have included these things if it was within the capabilities of common consumer hardware during Doom's initial era. Some interest in the more modern feature-set offered by Doom source ports was demonstrated by the Doom Bible (http://5years.doomworld.com/doombible/), a piece of literature compiled during Doom's development in order to provide project direction. The team has drawn inspiration from this literature. The project has grown and changed considerably since the idea was introduced.

Knee-Deep in ZDoom is developed by a medium-sized core team, and has accepted contributions by a large number of mappers who often frequent the ZDoom forums.

While the majority of the Doom Community enjoyed KDiZD, people found things to complain about. Before the WAD was released, Tormentor677 started hype similar to Action Doom's. Not as many people bought the hype though and many thought it was a bad idea to try and remake Id's levels, so the WAD already had criticism before it was even released. Many people found the use of monsters from the monster resource wad disappointing due to them being overused. Some Doomers thought the level of detail was too high, and the maps were too different from the originals.

Fans of the WAD praised it for the attention to detail and the amount of work that went into the design of the levels. The ZDoom features kept fans on their toes as they discovered new areas and reminisced familiar areas from the classic Doom. It received a Cacoward and a Mordeth award (Released project with the longest development time) at the same time.