For more information on this article, visit the The Darkest Hour page on the Doom Wiki. 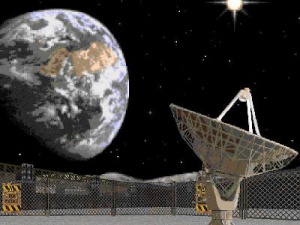 The Darkest Hour is a 7-level hub set in the Star Wars universe, using enemies, weapons, graphics, sounds, and music from Dark Forces. Play the role of Wrok Onmo, leader of a vicious gang of interstellar mercenaries. Steal the plans for the Imperial Cybernetics Facility from the Thal Vaishet Moon Base. Wreak havoc on the Imperial Space Station Alpha Centauri. Have a "disagreement" with Quatto the Hutt in his fortified palace. Hook up with a rebel spy in Mos Denra who is willing to pay handsomely for your services. Take down the IRF on the remote planet of Nagin Prime.

The hub structure allows the player to move back and forth between maps, and is in keeping with the mission. This requires achieving sub-objectives beyond merely picking up keys.

It is probably the first wad for ZDoom that features domed structures. 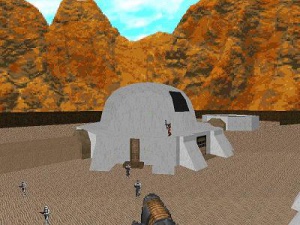 There are new weapons graphics, but these work just like DooM2 weapons. The weapons have not been modified through DeHackEd (and this mod was created before DECORATE allowed the creation of completely new weapons).

This can be considered a "total conversion", as it replaces enemy/weapon/decoration sprites, textures & flats, TITLEPIC and other graphics, sounds, and music. 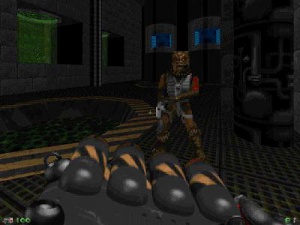