For more information on this article, visit the Sin City page on the Doom Wiki. 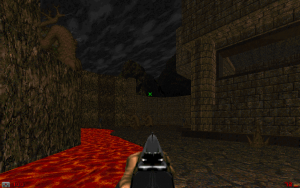 The Quake-esque architecture and feel at work.

The first in a series of three wads, Sin City is a small map made up of largely brown textures. Ed Cripps cites

The Spirit World as inspiration for this short, violent and well designed single player adventure. ZDoom features are not used quite as often as in the later two WADs, but it does still include music by Skinny Puppy, new sounds and graphics (a TITLEPIC, amongst other things).

Aside from in the gameplay, this map does not bear much resemblance to its sequels.