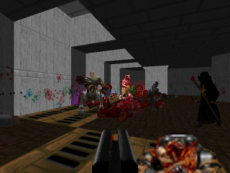 Screenshot of Æons of Death

Æons of Death is a massive compilation wad that brings together monsters, weapons, and items from numerous games, such as Heretic, Hexen, Quake, Quake 2, etc.

It uses a randomization code which causes any monster or weapon in a certain class to spawn a random monster or weapon respectively. For example, in place of an imp, a snake imp, a catharsi, or one of several others might appear. Also, in place of a shotgun, a SPAS Shotgun or the Flare Gun from Blood might appear. This guarantees that it will never be the same game twice.

Monsters might also drop weapons, ammo, health, or items such as bottles of medicine, artifacts, or runes which can also be stored in the inventory for later use.

Game modes override the current selected themes and extras. The Joke Mode, however, is taken into account for spawning joke weaponry found in the game modes. Current game mode descriptions: None

Options->Display->Messages Also "Minimum Message Level" to "Obituaries". This is to avoid getting a lot of (unnecessary) messages in the screen that might cover your stats. This also stops lag from building up on picking up items.

which caused a bug.