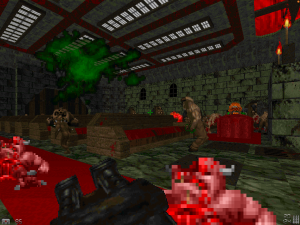 20-06B interrupts a ritual in the City of Dis, the fourth level of Zen Dynamics

Zen Dynamics is a 7.5-level semi-partial conversion created by Xaser. It includes new monsters, crazy boss fights, and arguably the most advanced weapon set ever created in the ZDoom engine. It requires either ZDoom 2.1.7 or later or GZDoom.

After a long wait, Zen has finally been deemed finished for good! The 2.5 release has added alt-fires for all the weapons, as well as a couple of brand-spanking new toys for your entertainment.

Although development is complete, visit the official Zen Development thread on the ZDoom forums for questions, comments, and support. (see external links)

Zen Dynamics was a company formed by a disgruntled UAC researcher that focuses on weapons research and biological research, with their main project focusing on bio-mechanically enhanced soldiers. However, due to the demonic invasion of Mars and Earth (the events of Doom and Doom II), the company was devestated, losing over half their staff to the disaster. After the disaster, Zen Dynamics merged with the remainder of the UAC, which kickstarted the shattered Earth economy and placed both companies as head government bodies. Zen Dynamics and the UAC resumed the bio-mechanically enhancement project under the name "Operation Biophage" and also resumed research on teleportation technology. At the beginning of Zen Dynamics, two successful prototypes were created in Operation Biophage while a prototype gateway is due to be tested.

However, during the testing of the two prototype Biophage units, codenamed 20-06A and 20-06B, something went wrong and 20-06A was rendered helpless. The reason for this was visual sensor failure cause by a Biophage researcher, Dalton Wright, who sabotaged the unit. Dalton was quickly fired for this and swears revenge on Zen Dynamics.

Meanwhile, 20-06B is cyrogenically stored in a Zen Dynamics lab in New Fork City in Texas (MAP01 - Laboratory). However, the next time he's activated, the first thing he sees are imps. Quickly, coming out of his storage cell, he kills the imps to find that more demons are in the lab. 20-06B aquires some weapons and slays the demons in the lab before escaping it. He then goes into New Fork City (MAP02: Urban Doom) to find that it has also been taken over by demons, with his scanners detecting the prototype gateway set up at the refinery. After doing some cleanup duty in the city, 20-06B unlocks a rapid-transit lift that takes him to the location of the gateway, an abandoned refinery (MAP03: Refinery), where he finds the bodies of those who viewed the gateway test, including the only survivor: The head Zen Dynamics Research and Development, Dr. Marshall Lanning, who is rapidly dying when 20-06B finds him.

Lanning lives long enough to reveal to 20-06B that Dalton had sabotaged the gateway in revenge for his sacking so that it's destination was Hell, releasing the demons in the process. 20-06B sets off after Dalton and when the two meet, Dalton reveals that he is actually sent by Baphomet, the lord of all Hell, to re-open a gateway to Hell so that Hell can conquer earth. Dalton then turns into a bio-mechanical monstrosity and fights 20-06B. 20-06B defeats Dalton and goes through the Gateway, landing in the City of Dis.

Upon landing in the City of Dis (MAP04: City of Dis), 20-06B, stripped of all his weapons, finds the body of Malcom Sailor, the researcher who discovered that Dalton sabotaged 20-06A. When the demons invaded, Sailor went through the gate to escape, though died after going because of the injuries sustained in the process of escaping. However, he lived long enough to make a log of the disaster, noting that once he came through the gate, noting that the only way to stop the invasion is to kill Baphomet himself, he overheard a couple of Demons talking about an ancient artifact called the "Bloodsphere" hidden in a nearby Cathedral. 20-06B sets off to find Baphomet and stop the invasion.

Baphomet was originally thought to be in a cathedral at the center of the city dedicated to false Gods. However, upon entering the cathedral, 20-06B finds a large horde of demons. 20-06B defeats them but finds no sign of Baphomet. 20-06B then goes underground searching for Baphomet(MAP05: Shadowrun). After going underground and surfacing again, 20-06B finds a powerful prototype weapon before managing to find a portal in the area. This portal take 20-06B to one of the inner circles of Hell (MAP06: Malebolge) where 20-06B does a mass assassination of the higher ranking demons in Hell's army. After struggling through the heavily guarded Malebolge, 20-06B finds a more organic looking portal, which leads to the center of Hell

20-06B eventually finds Baphomet at the center of Hell (MAP07: Death Sentence) and, after defeating monsters similar to the one that Dalton transformed into, the two fight to the death. 20-06B is the victor but at a cost: he is trapped in Hell, with no way out.

MAP08: Core Zero: Core Zero is accessible from MAP02: Urban Doom. To access Core Zero, you first need to get the yellow skull sky. Once you have it, grab the Stinger in the room unlocked by the yellow skull key and then return to the previous room. Shoot the section of the main pillar that's brighter than the rest and it should begin to glow blue. A bounce pad will appear outside. Complete the rest of the level and, once you defeat the Arachnophyte, use the bounce pad to get up to the building across from the bridge that leads to the red skull building. Once on top of the building, follow the level until you get on top of the elevator at the end. Once that's done, you'll be in Core Zero.

The aim of Core Zero is to destroy the titular core to cripple the demons operations in the area. However, there are two downsides: The first is that you lose your weapons upon entering the Core Zero facility and the second is that once the core is destroyed, you only have 20 seconds to escape from the facility. This is the only location before Hell where the ChaosZero SMG can be found.

MAP00: Lost Station: The Lost Station is accessible from MAP04: City of Dis. To access the Lost Station, you first need to shoot the switch through the barred windows of the second building, past which a Soulsphere and fusion cell lies, which opens a back door to the room. Enter the room, defeating the Hell Knight in it first, and then hit the switch in here to lower a lift at the other side of the building, behind the bars next to this switch. Ride this elevator up and at the top, hit the switch to lower the bars. As you re-enter the secret room, the pillar with the Soulsphere on it will lower. Grab the Soulsphere and, if you wish, ride it back up so you can jump to the pillar with the fusion cell on it.

Once you've done that, complete the rest of the level until you get the red skull key. Once you have the red skull key, run back to the area where you hit the switch to raise the bridges in the room with the yellow skull key. They now should be a door here, requiring the red skull. Open the door, get the goodies and step on the pentagram floor switch. Now head back to the cathedral and head to area near the end: In the tan room before the end, take the second right. Hit the floor switches and head back up to the room with the coffins. A previously closed door should now be open. Enter this door to find a room with a Megasphere and a closed force-fielded door at the other side. Press use on the force field and you should see through the other side that a door has opened at the other side of the cathedral. Find this door, enter the room and go in the hole. You'll then fall into the Lost Station.

Zen Dynamics is one of the more popular WADs of the ZDoom community. The WAD uses almost every ZDoom feature that was available at the time. Many agreed that the new weapons and the reloading system made changed the Doom experience just enough to not ruin the Doom gameplay but make things feel much fresher, however some people found it more of an annoyance than anything. The amount of new monsters and interesting boss fights was also appreciated by Doomers. Today, the WAD as more than 80 votes on Doomworld's Idgames at a 4.5 star rating. The WAD just came short of receiving a Cacoward but was mentioned on the article as a runner up.