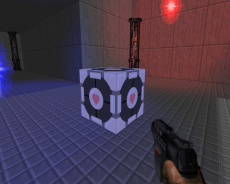 A screenshot from the Complex in ZPortal.

Included is a test map, where you can fully experiment with the portal gun to see how it could be used in a real map.

ZPortal is an expansion of the ZDoom Portal Gun. It is a 4 level wad connected by a hub map, which you will have to visit several times in order to unlock the final level. The levels include the Grey Complex, the Canyon, the Sky Palace and The Castle, as well as the Dimensional Gateway which serves as a level selector.

In addition to the maps are new "weapons", inventory and obstacles. The two new portal guns are the sticky portal gun and the mobile portal gun. The sticky portal gun allows players to "stick" to walls when teleporting through a portal, making it possible to get around corners with a pit. The mobile portal gun fires a slow moving projectile that can be teleported into and out of while it is in mid-air. The inventory items include the Portal removal device which destroys any open portals, and the red portal camera which is to be used with the mobile portal gun. There are also droids, which have different purposes. The nullify droid destroys any open portals in sight and stuns the player. The override droid prevents the player from firing his weapon. Finally, the plasma turret fires a projectile at the player which pushes him around. There are also blocks in some levels which the player can push around, jump on and block doors from closing.

The story of the WAD is very vague, but exists. The title screen shows a glowing strange device in a lab of some kind. There are no cutscenes in game apart from the ending, which makes things slightly clearer. Because the WAD is based on a two year old trailer, there are little to none connections to the real Portal game. The credits also slightly change when finishing the game rather than picking it from the title screen.

There is also a time trial mode. In this mode the player must race to the finish to get the fastest time possible. The only map that is available is the Grey Complex due to its simple design (and familiarity for anyone who played the demo). The map is slightly edited to make it easier to get better times, and to prevent extreme short cuts. There are also bonus clock items scattered around, which reduce the time by 3 seconds. There is no par time or current record set by any player.

While the first release of the demo WAD was extremely well received by players, ZPortal could be considered a flop in comparison. The WAD was heavily criticized for its lack of detail in maps, despite that the WAD was supposed to fully focus on the game play. People also disliked the awkward automatic teleporting from the sticky portal gun.