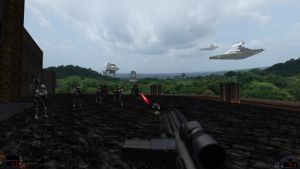 A screenshot of Xim's Star Wars in Doom II

Replaces all weapons, enemies and items with Star Wars themed assets. Gameplay is changed quite a lot, but attempts to keep some of the balance of Doom. Most projectiles are 3d models of Star Wars blaster effects. Infighting is also rare and usually only happens between imperials, aliens and bounty hunters (they won't attack their own team). The Icon of Sin is also replaced with a more traditional boss enemy, Emperor Palpatine. You can play as Kyle Katarn or Mara Jade and find lightsabers and unlock force powers, or you can start off as a Jedi. You can also go without the force and play as a rebel trooper or smuggler, each with their own starting weapons, or even go adventurous as the Mandalorian armed with a wrist launcher that boasts several different abilities.

- Converts almost everything in Doom into a Star Wars theme
- 20+ Weapons (including grenades and special weapons).
- 40+ Enemies (all Doom 2 enemies replaced, with many variants).
- A selection of player classes, some with special abilities
- New music and sounds.
- Optional add-on packs including prop replacement, more music and compatibility patches with certain mega wads.