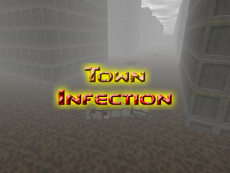 Town Infection title from Beta Stage 4.5.9 (The difference is that the final version contains the subtitle "The Flooding" under "Town Infection"). 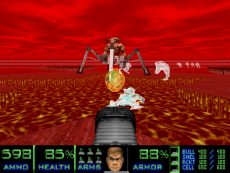 The Super Plasma gun, the Cyber Mastermind and Ghost Demons in the background.

In this wad you'll fight many known monsters and some new ones, going through various environments from military stations to hell itself. It has lots of cutscenes, intro and outro scenes, adding new weapons to your inventory so you can face the fiery forces of the infestation and hell. Your goal is to clean it all and leave no monster alive.

You are a soldier who was left in a coma under unknown circumstances in a Mars assignment when you were a marine in the UETC (CREI in Spanish), you were in that state for five months and somehow you woke up in your house, in your own room, but it seemed that a lot of stuff was missing. You wonder why.

You check out through the window to see what has changed in 5 months and what you see leaves you with your mouth open for long minutes: The river flooded the town! And seems that it looks really dirty. This is not good, you check on the Internet (it seems that 3G connectivity is still working) what happened and the only webpage that provided any info said that a big storm caused it. The river was not so clean, and that mixed with the acid rain (yeah, everything is wrong nowadays) caused that the people who had any contact with the infested water became some kind of zombies. At your army base, there were rumors of a secret station under the river, now is the perfect chance to see if it was true and make one last effort for mankind. The world is counting on you. 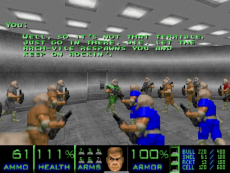 A cutscene showing a dialog between you and many soldiers

Town Infection was developed for GZDoom. Although it is playable with ZDoom, Town Infection makes use of 32-bit PNG files and MAP30 uses 3D floors, which are rendered incorrectly on ZDoom.

There are a single player and a cooperative edition.