The Community is falling 2 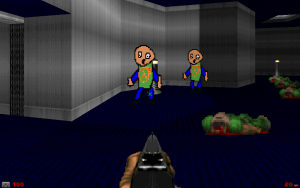 Following on from its predecessor, CIF2 is the 17th in Kaiser's final series of WADs, and promises to "bend your wookie". This time featuring 6 maps and a slightly more involved story - you return to the persona of "The Hacker" and proceed to hack into doomworld.com, only to find that it's fallen under deadly assault from Half-Life 2 n00bs. You then continue on to kill as many as you can and once again save the community... before destroying it anyway.

This level set also uses familiar rooms from the Doomworld Forums series of wads, and once again works as an in-joke that those from outside of the featured communities may not quite understand. Kaiser also made The Community is falling 3, but has since left the community, so more CIF wads are highly unlikely to be made by him, no matter how much the community falls.