The City of The Damned 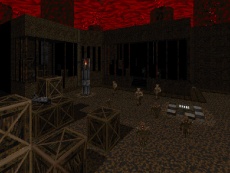 The City of The Damned is a large single map created by Tormentor667. It is set in a hellish city and utilizes Blood resources. Most of the map occurs in a somewhat urban environment but has a few hell themed areas, including a final boss battle with two Cyberdemons.

It also has a sequel, The City of The Damned - Apocalypse.

TCoTD was generally very well recieved by both ZDoom users and Doomworld members. It was praised for its attention to detail and atmosphere in /newstuff #181.