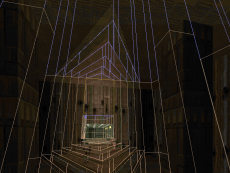 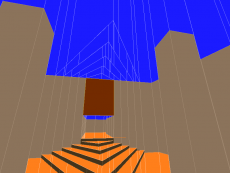 Polymost is a software and OpenGL renderer developed by

Ken Silverman as a replacement for the Build engine. From December 2004 to February 2005, Randy worked on adding the software rendering parts of Polymost to ZDoom. After remaining a decade in unfinished form, it was removed in 2014 (bbc3b69), so ZDoom 2.7.1 is the last released version of ZDoom containing this feature. GZDoom 3.0 added a new software-based 3-point renderer (without Y-shearing when looking up and down).

The two screenshots illustrate the difference between Doom's horizontal projection and the true 3D perspective of polymost. 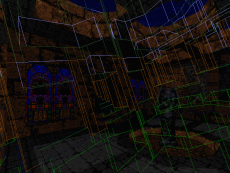 One other console variable affected the polymost rendering: gtang. It corresponded to the global tilt angle, in