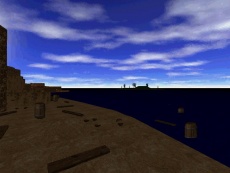 A screenshot of Phocas Island 2

Phocas Island 2 is a WAD created by Chopkinsca. It features a massive non-linear environment with a temple hidden inside. GZDoom is required to play this as 3D floors are common. There are six maps connected by hubs to make the WAD feel like one huge adventure.

The gameplay of Phocas Island steers away from the typical run and gun style but instead emphasizes figuring out how to solve puzzles using various items in different places, similar to the "Dizzy" series. The WAD has only a few monsters and even fewer ways to kill them, as the WAD only contains 3 weapons: An axe, a rifle and a "log gun" which acts as a Chaingun. The WAD also has multiple endings depending on if you managed to find and defeat the final boss, which can only be found if you solve most of the puzzles.

Chopkinsca announced that he is working on a revamped version of the WAD to iron out bugs and improve gameplay elements. He is currently taking suggestions to make the WAD even better than it already is. It will boast new areas, bosses, puzzles, and an unprecedented 12 alternate endings, each with a drawn image to help narrate them. He has several other team members helping add or improve content, notably jutegyte aiding with the unique music tracks, Captain Ventris for writing the revamped story, some grammatical mistakes, and writing the 12 endings. The team is currently looking for an artist to draw a picture for each of the wad's endings.

Phocas Island 2 was well received by players. Fans of the WAD enjoyed the detailed environments, unique game style and interesting puzzles. Other than a few small nitpicks about the story many consider it to be one of the best WADs created. It claimed a 13th Annual Cacoward.