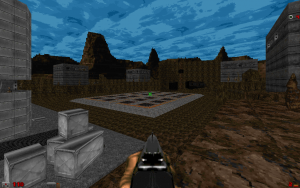 A large landing platform, guarded by a large number of marines.

Using DeHackEd and a mapping style inspired by Espi's wad "Ruma", Enjay created a large testing facility and a James Bond styled scenario. One man must inflitrate a base guarded with heavily armed marines, guard dogs and various droids and drones, and kill/destroy pretty much everything. Naturally this one man is you.

On the plus side, you are allowed to not only be a mass murderer of marines and defenseless scientists, but you can also destroy umpteen windows and computers. Use of ZDoom features is very high and the large map makes for a fairly long playthrough. A popular wad due to its rather unique style and gameplay, this bought together a lot of the bigger names in the community for help along the way.

This wad makes use of a lot of new resources (notably Strife enemies), as well as a couple of cutscenes and many other ZDoom features.