The Ghoul's Forest series is a collection of WADs created by CutmanMike which started as a joke "Scare 'em" map, then turned into a singleplayer/co-op horror game and finally a completely new type of multiplayer game for Skulltag. Originally the Ghoul's Forest was a horror themed WAD to play on your own or with you friends, not offering the usual Doom experience but rather a battle with a unique scary looking monster in a huge open area. This spawned many similar WADs and were given the label "Ghoul WADs" by the Doom Community. The Ghoul's Forest had two sequels and a multilayer spin-off called "Ghouls vs Humans".

Every text file in the series contains WARNING: NOT FOR THE FAINT OF HEART due to its nature of attempting to startle the player with screams and photo realistic looking enemies. 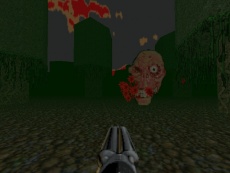 A screenshot of Ghoul 1 with the ghoul "Choke" getting shot.

The Ghoul's Forest is a old WAD created by Cutman. It features a large open area with a few weapons, extremely limited ammo (sv_infinite ammo is almost required here), and one very fast monster. The idea is to kill the monster to unlock the exit to escape. However the monster is extremely hard to hit and moves at lightning fast speed. If you do nothing "Choke" will bite you to death in seconds. Killing the monster allows the exit switch to raise from the ground, but due to a bug the level can be exited at any time. Originally the WAD used DEHACKED to create the monster but was updated with DECORATE support.

The Ghoul's Forest was intended as a small joke to scare a handful of players. However it gained enough attention, when it was uploaded to idgames, to gain a sequel. 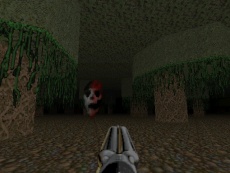 A Screenshot of Ghoul2 with the ghoul "sjas" chasing the player.

Like the first, you are stranded in the middle of a dark forest with a monster somewhere. A monster you must kill. This time it is a little different however, and a lot harder. You only have a super shotgun to kill the Ghoul and ammo for the shotgun is scattered around the forest. You start in the middle this time and the Ghoul comes from the outside area. The new Ghoul "Sjas" is faster, hardly visible and will kill you in a single melee attack. He also teleports away when hit. You must rely on sound to defeat him as the only way of knowing if he is near is by his signature screaming sound.

The Ghoul's Forest 2 gained much more attention than the first wad of the series. It inspired many people to make spin-offs, maps and even their own "non-ghoul" horror wads.

Ghoul 2 in general had mixed views. Many people liked the gimmick of a scary forest with a single thing quickly coming at you from random directions, and enjoyed playing it online with friends. Others disliked the gimmick for various reasons, such as the lack of detail (copy-pasted trees), overall polish and distorted scream sounds. Some found it too easy while others couldn't hit the ghoul once. Regardless of negative feedback, the series gained another entry.

The Skulltag Edition of The Ghoul's Forest 2 is a Skulltag friendly version to work with Skulltag's Survival game mode. There are also several changes such as: 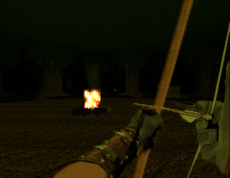 A Screenshot of the starting point of Ghoul 3

The Ghoul's Forest 3 is the final single player WAD in the series of The Ghoul's Forest. Ghoul 3 has four ghouls which you have to kill (rather than one) before they kill you. Standing around and shooting at it or running around the outside won't work any more as they all have different attack patterns.

Ghoul 3 plays like Ghoul 2. You start in the center of the forest with a camp fire. The fire goes out and one of three Ghoul's appear and start to hunt. Sjas, the ghostly face from Ghoul 2, Jitterskull, a huge skull with a strange movement pattern and a charge attack, or The Creeper, a shadowy figure which pops up in your face up close. Once all three have been killed the boss "Yurei" appears. If you defeat her you are victorious and the game ends.

You're a hunter. And a damn good one at that. You've slain beast after beast and have won award after award for your accomplishments in the wilderness. Your home town sees you as a hero, but it is not enough for you. When you hear of a man being executed for scaring the public with foolish lies of a screaming monster in the forbidden forest, you begin to wonder. Perhaps there was more to the forbidden forest than people said? You recklessly take your bow and head out, with thoughts of the ultimate prize. You search all day for the beast, but find nothing. Disappointed, you give up and make camp. A few hours into the night a strange noise awakens you. You swiftly grab your bow and start to realise that this challenge has turned into a fight for survival!

Ghoul3 like the other two had mixed views. Many were sick of "ghoul wads" by the time of its release while others couldn't wait for it. Fans of the series enjoyed the new ghouls and upgraded map. More inspired wads followed and even more game play videos on Youtube of the actual player's reactions to the monsters. People who disliked the wad again criticised the low quality of the map despite the texture upgrades. Many MANY players where shocked by the creeper and didn't understand what happened, thinking that the wad was just a joke to try and startle you. For this reason many players rated it very low. Players also disliked the disturbing images that the Yurei flashes onto the screen when she kills you, and refused to play it after browsing through the wad. 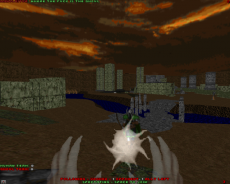 A screenshot of The Creeper about to stun a Hunter and go in for the kill.

Ghouls versus Humans is a team deathmatch/team LMS themed WAD starring the cast from The Ghoul's Forest 3. The idea of the wad is that there are two teams which have different classes. The human side gets the Marine, Hunter and Cyborg while the ghouls get Sjas, Creeper and Jitterskull. Instead of finding weapons and health around the arena, the classes only have the weapons and powers they start with as no items are spawned in the map.

The WAD supports user and official expansions to increase the amount of classes and maps. Official ones include GVH:Endless Warwhich brings the map count to 22 and adds two new classes.

Each class has different abilities, powers, pros and cons.

Marine
The marine (Doom Guy) comes equipped with three weapons. Two fast firing dual pistols, a riot shotgun and a machine gun. He is the only class with more than one weapon. He runs fairly fast and makes footstep sounds, making players aware of his presence. He can also throw grenades with his altfire to blow ghouls to bits, but he only carries 10 of them per spawn.
Hunter
The hunter (from Ghoul 3) wields his good ol' bow and arrow to fight ghouls. He can load and fire them faster than he did in Ghoul 3 but still has limited ammo and must pick them up off the floor if he should run out. He's the fastest running class in the game but he must slow down to aim his arrows. He has the ability to enchant his arrows with fire, lightning or ice by changing weapons. These magical arrows have different properties which are handy for different situations. He can also give Ghouls a quick magical blast doing radius damage around the Hunter.
Cyborg
The cyborg is a half man half machine heavy duty class. He wields a rapid fire plasma gun which can destroy enemies in seconds. His ammunition is limited but he can recharge his ammo supply by standing still. He is the slowest class (besides The Creeper) and makes heavy footstep sounds as he walks. His alternate fire is a jetpack, which allows him to fly but drains his ammo charge quickly.

Sjas
Sjas is the screaming face from Ghoul 2 and 3. He is the only class that can fly without stopping. His attack is a close range scream attack, which can heavily damage nearby foes and kill right up close. His downfall is his high pitched scream that he emits as he travels. While he is still he remains silent and turns slightly transparent, making him able to pop out of the shadows and scare players to death. Sjas also has an alternate attack which is a reflective scream. This can reflect projectiles and stop bullets in their tracks.
The Creeper
The Creeper is a small, slow moving class with a twist. He is barely visible and crawls across the floor like a shadow. He can easily hide in corners, behind steps, under corpses of other players etc. His attack is a melee attack where he screams his victim's soul out. The victim gets The Creeper's image flashed up on their screen before dying instantly, much like in Ghoul 3. He has an alternative attack, a curse which stuns players in their tracks. He Creeper only has 3 of these until he stands still to regenerate his supply. The Creeper also gets a burst of speed when he is in pain.
Jitterskull
Jitterskull is a huge class with a odd movement pattern. His "jitters" seem like he's teleporting across the map, and will take some time to master. His attack is a charging attack which can crunch players up into bits in a single bite, if aimed correctly. He also has the most health and can take quite a few hits before going down. He can also move properly but slowly by holding altfire.

From the day of its beta release, GVH received mixed opinions. It was mostly praised for its frantic gameplay, influence of team work and unique classes. Others felt the gameplay was unbalanced and the maps were not cut out for the style of play intended. Despite this, GVH has been played almost every single day for just under a year since its 31/10/08 public beta release.

Ghouls vs Humans received one of the 16th Annual Cacowards.