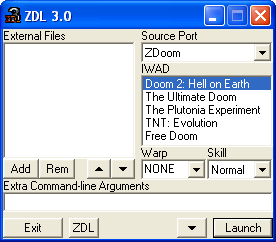 ZDL is a simple but user friendy and feature rich cross-platform launcher originally written by BioHazard. It has had several modifications and updates since its first launch.

Several versions of ZDL exist (from newest to oldest):

ZDL can start and join multiplayer ZDoom games by using the multiplayer drop-down panel. It includes these options:

ZDL has had many versions and upgrades throughout the years. A brief version history: