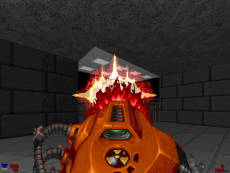 A screenshot of the Multi-Projectile Weapon

The Weapons Resource WAD (or WRW) is a collection of new DECORATE weapons created for editors to use in their own projects. It was started on June 13, 2005 by Hobbs in light of the Monster Resource Wad, a popular compilation of monsters free to use in other wads, and is the project the WRW is based off of. Therefore, it is one of a number of spinoffs of the Monster Resource Wad, but only the second to be eventually released to the /idgames archives. It was created for the ZDoom Community Build and is not entirely compatible with ZDoom.

Seventy-two weapons, some of which are remakes of ones found in different games, while others are completely original, make up the wad, along with a demo level. They were crafted by volunteer members of the ZDoom community. Weapons were submitted to an appointed judge panel at the WRW's ZDoom Forums thread, who rated the guns and subsequently decided whether they were included or not.

The WAD was planned to be forever ongoing, with new versions being released as submissions and interest continued. However, after the release of version 2.1, many forum members expressed their disapproval with the WAD, saying it had turned into a random mishmash of mostly mediocre weapons. Eventually, as interest was lost by forum members and judges, the project was officially ended on July 31, 2006, and has since been replaced by the Armory Resource Wad at the Doom Armory, hosted by DRDTeam.org.

Submissions took place at the Weapons Resource WAD thread found at the ZDoom Forums. Once there, it was rated by three appointed judges, with a secondary judge who took the place of rating a weapon if another judge themselves submitted a weapon. Overall, the weapon must have garnered a score of 9/15 to make it into the wad; lower scoring weapons were not accepted, but could later be resubmitted if changes were made, especially for bugfixes.

During its one-year existence, the WRW saw many changes among the judges. Hobbs would eventually resign from the leading role on August 27, 2005, and the WRW was taken over by DomRem. TheDarkArchon, the final leader, acted as one of the three judges, along with DomRem and Inuyasha_989; Chronoteeth and Cutmanmike were former judges. Froon played the role of the secondary judge.

Rules allowed anyone to submit a weapon. General guidelines to follow, as originally stated by Hobbs, were:

A weapon had to have been created by the person who submitted it, unless the true author gave permission. However, authors were allowed to submit weapons already included in their own projects, with ZDGuns and Tainted Decorum guns making appearances in the wad.

Starting weapon quality. About on par with the Pistol or Fist.

Secondary weapons, such as the Shotgun or Chainsaw.

Rocket Launchers or other powerful weapons.

These weapons attack indirectly or not at all.

All the materials in the Weapons Resource WAD were created for others to use in their own projects. The aim of the project was not to be a massive weapon modification. If used in a wad, proper credit must be given to the author(s) of the weapon. There is no need to ask for permission.

The size of the credits section in the text file eventually forced a limit in which individuals were only listed if they had contributed a weapon and/or many other closely-related things that assisted the project. This ended up leaving others, or other miscellaneous things they did to help the project, out. Therefore, they are listed here as additional credits: