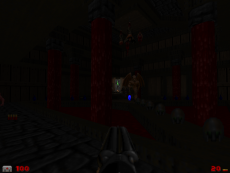 Titan 2, released in early 2009, is the sequel to Titan. It's made for single or cooperative play in Doom 2 and consists of 9 regular hell-themed levels as well as a secret level. GZDoom features such as dynamic lights and 3D floors are used, as are regular ZDoom features such as slopes and scripting. In contrast to Titan's mostly linear level design, Titan 2 is predominantly non-linear, leaving the player to decide in which order he wants to progress through the various areas of each level. Titan 2 is also vastly more detailed as well as being significantly more challenging than its predecessor, generally due to having a higher monster count. As was the case in the original Titan, plenty of tricks and traps are employed to keep the player on his toes. The WAD includes a new weapon in form of the Skulltag minigun as well as several new monsters, some of which also appeared in the original Titan. Highlights include various tricks and traps, good visuals and some very hectic and challenging battles, especially on the higher difficulty settings.