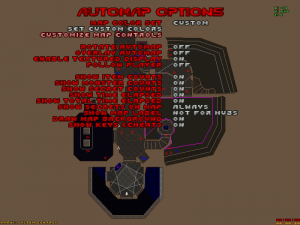 The player arrow, several triangles, and a key as shown on MAP01 of TNT.

The map arrows are the little vector graphics used in the automap. In Doom, the only such graphics that is always visible represents the player, and looks like an actual arrow, with its head and fletching. When using the iddt cheat code, the letters "ddt" appear alongside it. In Heretic and Hexen, the player is instead represented by a dagger. In all games, with the automap cheat or a scanner powerup, all actors are represented with an isosceles triangle. Optionally, keys can be represented as a key rather than a triangle. The colors for these graphics can be changed in the automap options menu; but some of the graphics themselves can be changed as well.

The GameInfo definition in MAPINFO has a MapArrow property which defines the graphics used for the player. If a second graphic is added to the line, the first is used in normal automap mode, and the second when the map cheat is active. In addition, CheatKey and EasyKey are used to represent keys on the automap when appropriate.

The format of the vector graphics is very simple: each line of text corresponds to a line of graphic, represented by two points each defined by their relative coordinates expressed as floating point values between parentheses. The point (0, 0) is at the center of the graphic. For scale, the largest graphic (the key) does not use values higher than 2.0.

This is the Doom map arrow: