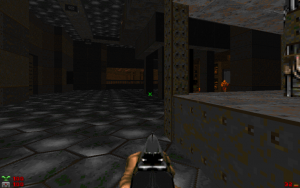 An industrial area, with coloured lighting and moving machinery.

Back in the day of ZDoom 1.22, people were only really just working out its capabilities. Kurt Kesler, author of the K2 bridge and a whole host of other wads for Boom and vanilla .exes was among these in 1999. His seven-wad KZDoom series, starting here makes use of a lot of these features, and was for a long time considered to be the authority and best example of how features are used.

Making use of edited and tweaked Doom2 graphics to provide more for his dark, industrial theme, this map pits you against more aggressive zombies and imps with a faster firing shotgun in a variety of close-quarters fights, before you eventually escape the factory into the outside world. You start off well supplied, with a second or so to prepare yourself before being dropped into the fray - after that its all up to you.