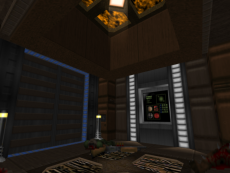 The starting room, with the shotgun mentioned in the backstory.

Insanity's Edge is a 1.5 level mod created by Starscream for GZDoom. The mod can run in ZDoom, but some visual effects may not work properly. The mod includes 1 rather long level with a par time of 30 minutes, and a separate level that includes the final boss fight. Custom textures and monsters are used along with various music for different areas in the level.

The mod development Started early February 2009, as a test to improve game play from the Author's previous mod, Darkness Falls. The mod slowly escalated from there and became Insanity's Edge. The mod production progressed smoothly and was first released on the 31st of May 2009.

The mod had only one development thread, at the ZDoom Forums,where the mod was first released. Version 1.1 was released shortly after, fixing some bugs and improving some aspects of the mod. Version 1.2 was released Almost 2 months later fixing more bugs. Insanity's Edge 1.2 was uploaded to /idgames as the final version.

Warning: There is some spoilers ahead. Skip past this section if you do not wish to spoil the story.

Insanity's Edge was designed to be a chronicle to Darkness Falls in terms of the story. The mod does not consist of much story, other than in the start cinematic and at the end. Here is the section of back story from the development thread:

This mod is set after the first demon invasion, and so the UAC is back to their normal experiments with teleportation. But this time the UAC is also working on the Demon Annihilation Resonator Type 2K, which was designed to wipe out demons by just being near them. Knowing the UAC, they screwed up again and demons came back from hell. And if things could not get any worse, the Demon Annihilation Resonator Type 2K has disappeared just a few days before. But this time the demons are acting different. They aren't killing for fun, they are killing for a different reason. 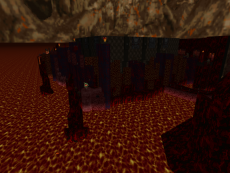 The endless sea of lava, at the Edge Of Insanity.

You are Sergeant Shaun Rumsey, a marine on a UAC base on earth that was recently attack by the forces of hell, after finding a large hell portal in the mines. Marines fought bravely, but were outnumbered and slaughtered. As far as you know, you are the only one left on this base, and it is amazing you are still alive. Maybe you have better skills than you first thought. You see a shotgun in front of you, and hope that no demons will come teleporting in once you pick it up.

The mod has some progression through the various parts of the level. Every part has its own theme and music. The mod progresses through 5 different parts:

The UAC's "Insanity's Edge" Mining Facillity or Site A

This is where the player starts. It includes various tech buildings invaded by demons. You have to return to this location several times to enter some doors that are locked at the beginning. The end of the first map is right behind your start location, but requires a blue key at the other side of the level.

The other half of the UAC base, which was corrupted by the demons, which mainly contains high-tech hellish structures. Although the demons came from Site A, they retreated to Site B, in fear of their own hell gate, as the Demon Annihilation Resonator Type 2K was destroying hell. You normally move back and forth through this section of the map, and is the longest section.

The Edge of Insanity

The frontier of hell's assault on the base, a huge rocky and hellish outcrop with massive disfigured structures of the underworld. The endless sea of lava is accompanied by the shores of glowing red rock. This is where you will find the final assets of your mission. You will only go to this section once, and the path through it is very linear.

This is every area (except for "The Edge of Insanity") but completely gone to hell. Demons are everywhere. You have what you need. Get back to the elevator and go down to the mines, to stop the invasion on this base for good. This part will take you through twists and turns of every other section, and will eventually lead you back to your starting room. go from there. 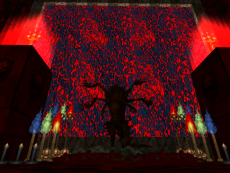 Diablo, in front of the hell gate.

This is in the second map. The hellish structure at the bottom of the base, discovered from the excavation, seemed to house a demon gate to hell. You try to enter, but the door is locked. Baphomet then blasts you through a wall into the chamber with the gate. Baphomet explains that hell is under attack by the Demon Annihilation Resonator Type 2K, and the demons have been forced to retreat to earth. They must hide as they have been pushed from their home world. The demons learnt of the plan the Demon Annihilation Resonator Type 2K is conducting, that will last for 7 years. The demons are now trying every way possible to fault it's plan, and to do that they must kill a select group of humans, including you. Baphomet sends his greatest champion of hell to fight you, Diablo. Diablo appears as the Inferno Demon monster from the Realm 667 Bestiary.

After you defeat Diablo, Baphomet shouts in anger at you, asking you if you know what you have done. He is interrupted by a black glow that enters the room, which is the Demon Annihilation Resonator Type 2K. It sends you to Cybergaze 2.1x, A UAC space station with the first Ion Cannon. It gives you a mission, to escort a lone marine that will end up at the space station in the near future.

If you wait until after the credit sequence at the end of the game, you will see Sergeant Shaun Rumsey alone in a medical bay on Cybergaze 2.1x.

The mod was liked as a good high quality mod. The jumping section in "The Edge Of Insanity" part had various mixed comments, most negative due to the difficulty of the platforming. The text in the mod consisted of some grammar and spelling errors, making some sentences hard to read. Overall, the mod was accepted as a good mod with efficient game play and solid flow.

The Difficulties in the mod are an acrostic poem for the word DARK:

The same applies to the name of the UAC weapon:

There is a secret 5th difficulty that you can access from the menu by going down past Killer. This difficulty is meant to be impossible and is recommended you do not attempt to win the mod under these conditions.

Using an all-map cheat on MAP01 and looking at the top of the map, above the Insanity's Edge Section, is a large cube with MAP KILLER 3000 next to it. This is a joke about Mappers Block.

The original name for the mod was Insanity's Peak, a story about demons invading a UAC Mountain base. The name was later changed to Insanity's Edge, and the old story was used as a base for the Winter's Fury mod's story.