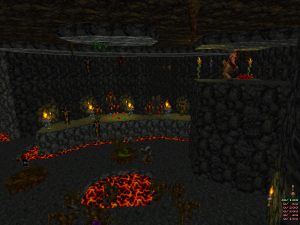 Barons of Hell? In my Heretic? 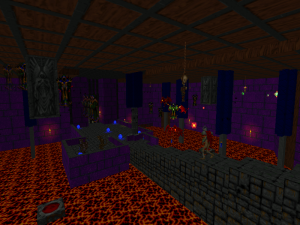 Hordes of Chaos is a series of episodes for Heretic, culminating in Hordes of Chaos X which is a compilation of the four previous issues with new content, providing five episodes of five levels each. 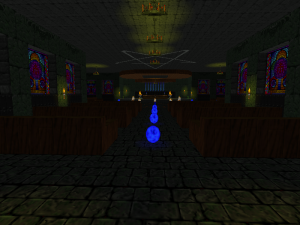 No monster in sight? It's a trap.

In their adaptation, the maps have gained an intense, slaughterfest gameplay which has often been compared to Hell Revealed. ZDoom features are used mostly to script ambushes and simple switch sequences. In many maps, the passage behind you will be blocked after you enter a room to prevent you from retreating to relative safety, forcing you to take risks when fighting a room's contingent of monsters. Otherwise, the maps also make use of ZDoom's ability to import actors from other supported games, and you will have to fight Doom and Hexen monsters with your Heretic weapons. Finally, a script removes all your weapons and ammo upon entering each map, ensuring that each map is played with its own limited "palette" of weapons. The inventory is left alone, though, so one item of each type can be kept from map to map. 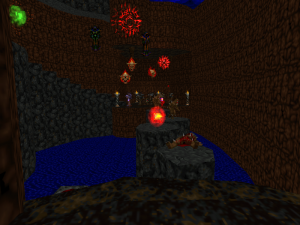 Not a lot of maneuverability.

The difficulty is increased by denying the player much room to move. Several maps feature cramped rooms, or small platforms surrounded by hazardous terrain or empty air, which allow the monsters to more efficiently focus their fire on the player. People are advised to try medium difficulty rather than hard. Note that the first episode of Hordes of Chaos has been made significantly harder (nicknamed "Death Edition") in the compilation than it was in the initial release.