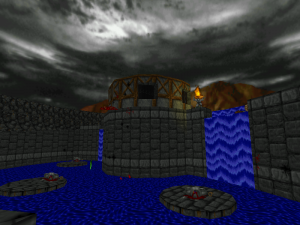 The monsters don't give a dam. 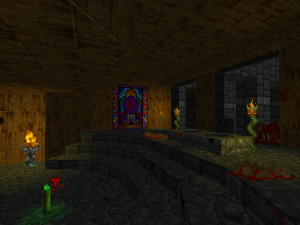 Not shown here: a nasty trap.

Fortress of D'Sparil is a single-level map for Heretic, taking the E3M8 slot. This allows it to replace the normal confrontation with D'Sparil in Heretic's third episode, though it is balanced for a "wand start". Nevertheless, as a result, it is not possible to jump directly to the new map from the menu, one has to use the -warp command line parameter, the map console command, or the engage cheat code to reach it.

The map uses relatively few ZDoom features, and offers therefore an overall classic look-and-feel. The textures for liquids (water, lava) are replaced by warping variants. ACS is used sparingly but effectively, though the instant-death trap behind the green doors can be a little frustrating. The final fight is made extremely challenging and you are advised to keep all your quartz flasks and mystic urns for it, in addition to as many ammunition as possible.

This map served as a base for MAP02 of Resurrection of Chaos.