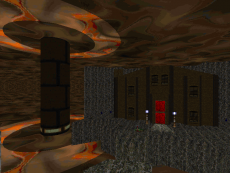 The main sky box and some level architecture

Enigma 13 is Lexus Alyus' very own attempt at creating a joke wad, with attempted gameplay and a humorous story that progresses throughout the level. This is a very trippy and weird wad which features brand new monsters! The general concept was to create something that was strange but playable (until the very last boss encounter that is, which will most likely require the god mode cheat). The detail is not over the top but not simple either. Also, beware of the evil teleporter tricks that this mod makes extensive use of (probably to great frustration).