For more information on this article, visit the Doom Resurrection page on the Doom Wiki. 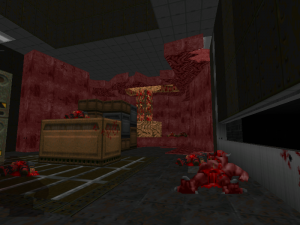 There's something rotten in Core.

Doom Resurrection is a five-map episode for Doom II, released in 2001. It makes good use of the features ZDoom offered at the time to enhance the ambiance and gameplay without changing it too much. 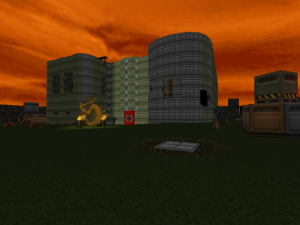 The story of Doom Resurrection has our hero the marine retiring from military duty in the aftermath of the demon invasion, and instead becoming head of security for Core, one of the many corporations born from the dismantling of the UAC. Core does not dabble in experimental interdimensional physics, but in genetics and chemistry, nothing that serious to worry about, right? Well, except that unfortunately, they decided to use demon DNA, and of course, all hell breaks loose again as a result. As head of security, you have installed safeguards to quarantine the entire complex and called for help in the form of a few airstrikes to soften up the opposition. Now you have to go through the various centers of the Core complex to eradicate all hostile lifeforms, and reach the headquarters to put a stop to the demon resurrection before it can breach out and infest the whole world again. 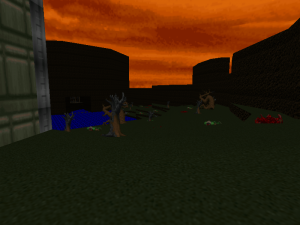 Beware of the mines.

The maps feature wide open areas with simple detailing, and more intricate rooms within the buildings. The use of ACS is non-intrusive, and only a few DeHackEd surprises, such as the presence of a minefield on one of the maps, will change the gameplay. Contrarily to the stock Doom maps, activating computer terminals is often needed to progress, though they are generally made blatant when so is the case. Health and ammo is sufficient in the first three maps, but become tight in the last two. The final map, in fact, contain by design not enough ammo to eliminate all enemies; instead the three bosses have to be defeated through a simple puzzle: triggering all the switches to activate a safety procedure that will terminate them. In the fourth map, achieving 100% kills is impossible as a scripted mechanism constantly spawns and crushes imps. Achieving 100% secrets is not always possible either, as two of the maps feature secret sectors too small to be stepped in, preventing them from being counted even if found.

To create its own identity, Doom Resurrection uses a few different sounds (such as the pistol's) or sprites (notably the barrel explosions), as well as new textures; but it is mostly the use of ambient sounds (borrowed from Quake II and Half-Life) instead of music tracks, that separate it from most other Doom II mods. 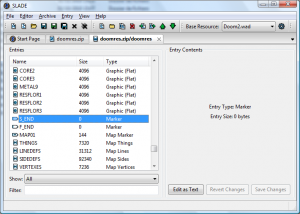 Doom Resurrection contains a severe packaging error which prevents it from being run with recent versions of ZDoom or derivatives. Among other warnings, the engine will stop with this message:

The cause of the problem is, fortunately, easy to fix. The culprit is a single lump, S_END, which is incorrectly placed and should in fact not be here at all. Its presence tricks ZDoom into believing all the previous lumps are sprites, when they are in fact not. Deleting this lump with a lump management tool (SLADE 3 on this screenshot) is all that is needed to make the problem disappear and allow to play the mod correctly.