For more information on this article, visit the Daedalus: Alien Defense page on the Doom Wiki. 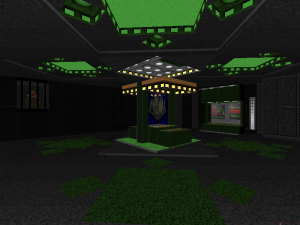 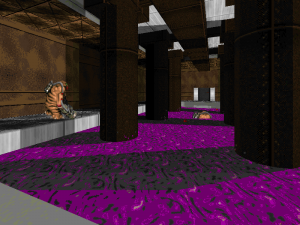 Daedalus: Alien Defense is the sequel to

Icarus: Alien Vanguard, but the gameplay was modified to get a greater emphasis on exploration, discovery, and puzzle-solving. It also uses a hub system and, like in Hexen, solving puzzles often require traveling to and fro between the various levels of a given hub.

After fleeing and destroying his invaded spaceship the Icarus, space marine Dave Razor rams his escape shuttle into the hangar bay of an alien spaceship. It's time to kill pretty much everything onboard that ship, blow some generators up, send it on a collision course in an asteroid belt, and flee yet again in a different escape shuttle onto the alien planet. Then what else to do but maybe learn the aliens' language and technology, steal a flying saucer, and see how it goes from there? Maybe that alien sending you radio messages will be a helpful ally, if you remember to constantly recharge the quickly-drained battery of your aural translator. 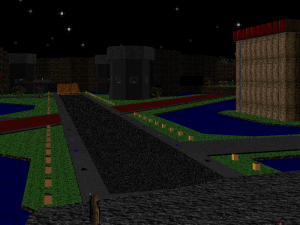 A landing strip? Who needs that?

Among the strong points of Daedalus are an exclusive set of textures made specifically for it, beautiful scenery and impressive futuristic machinery, and all-around high production value. However, it is easy to become lost in these levels, unsure of what to do next, and the scripted monster respawning can make revisiting levels in search for clues more of a core than was needed.