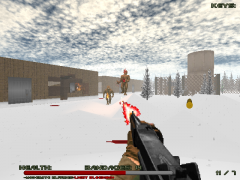 Cold As Hell is a total conversion set in the 1950's at a weapons research facility in Greenland. The usual Bad Stuff Happens (TM) and you, a US Marine, must clean up the mess.

The wad features custom weapons, a reloading system, a bleeding system (where the player is losing his health constantly when it drops below a certain amount), one large hub of about 15 maps, connected together, with the ability to travel between them; new enemies, an involving story with a certain plot twist, notes to read and information to learn before you can move on with your mission. One could think of it as either Silent Hill or Resident Evil with Medal of Honor or Call of Duty. In ZDoom of course.

It is 1954, and you are Gunnery Sergeant Henry Mills, a battle-hardened United States Marine. You fought in World War II, seeing heavy combat in the Pacific Theater and receiving numerous commendations for your bravery and dedication to your fellow soldiers. You are an expert in small arms and unarmed combat, and you have been tested time and again in battle.

After World War II, you were assigned to a combat infantry unit that fought extensively in the Korean War. Again you distinguished yourself, fighting with distinction in some of the heaviest conflicts in the war.

After the end of the Korean War, you were shipped back to the United States for assignment to your final post before retirement. You were assigned to a post in Greenland - head of security for the special projects division at Research Station 46-A. You expect it will be a quiet, if uncomfortable, assignment to finish out an exemplary career in the United States Marine Corps.

The original release of Cold as Hell had several serious bugs that render it unplayable on versions of ZDoom other than 2.0.63a. Even on the correct version, the mod is still plagued with serious bugs and numerous performance issues. Most critically, the weapon reloading code is broken in such a way as to prevent the player from selecting any weapon at all in many cases.

Performance with the original version was notoriously poor. Two patches were released to try to alleviate some of the problems, but they did little to correct the issues. 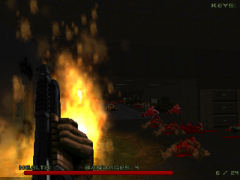 In 2008, the author of the partial conversion posted on the ZDoom.org forums to express his intent to fix many problematic aspects of the conversion. In November of 2008, Cold as Hell: Special Edition was released. The new version of the mod made a number of changes to the original version.

Visual effects were upgraded to take advantage of new features in GZDoom. The snow, which had caused numerous problems in the original release, was replaced with the author's weatherFX2 weather system, which used a much more streamlined and user-friendly approach to creating the snow effects than in the previous version. The weapons code was completely re-done, and many improvements were added to gameplay elements.

In addition to the bug-fixes and gameplay enhancements, the storyline was re-written slightly, and new voice acting was recorded by several members of the ZDoom community to fill in details of the plot that were previously unexplained.

Reception of the original 2004 release was mixed. While many players stated that they enjoyed the storyline and interesting setting, many were put off by the poor performance and bugs in the release. In spite of the problems, the original release currently has a 4/5 star rating on Doomworld's idgames mirror, and received numerous positive comments from reviewers. Most negative comments stemmed from issues of performance and gameplay bugs, but many comments also noted that the mod was overly difficult and unforgiving to the player.

The 2008 special edition was better received, without the negative comments about game-breaking bugs. The initial release contained some minor bugs and inconsistencies, which were subsequently fixed. Additionally, minor changes were made to gameplay in response to comments. Perhaps the most significant gameplay adjustment was the addition of the new "combat styles" which, when selected at the beginning of a new game, would alter elements of the game such as the weapon reloading or bleeding system. This system was introduced to try to accommodate players that wanted the gameplay mechanics to be slightly more forgiving to players used to the original Doom mechanics. The 2008 edition currently has a 4.5/5 star rating on Doomworld's idgames index.

In December 2008, Cold as Hell: Special Edition was awarded a Cacoward in Doomworld's annual celebration of Doom's release.