For more information on this article, visit the Chosen page on the Doom Wiki. 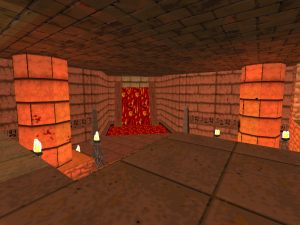 The underworld is a hot place. 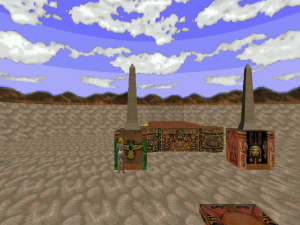 Chosen is a total conversion for Doom II.

In Chosen, players take control of a follower of Seth, named Kissa. She has been chosen by Seth to defeat Uraeusis, an abomination created by Apophis to destroy the world from within. Uraeusis has already charmed some men and gods in preparation for this goal. Kissa is dispatched into the underworld where she must fight through armies of soldiers from the gods and reach Uraeusis, and finally destroy him forever. 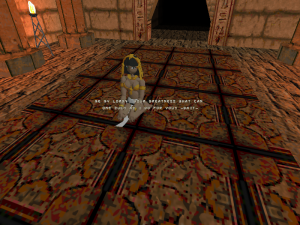 Kissa being briefed on her mission.

The first level is actually a difficulty selection level, reminiscent of Quake. There are many dangerous traps and puzzles to solve, with some really frustrating, while others that are really simple to get by. The boss fights are also fun, especially the final battle with Uraeusis.

Since this mod was created before DECORATE became a full-fledged content scripting language, the new enemies, items and weapons are created through DeHackEd. The weapons in particular can be recognized as using the logic of Heretic or Hexen weapons. All sprites were created through captures of 3D models created by the author. There are several scripted sequences, which convey exposition for the mod's story or show the changes triggered after lighting a sphinx lantern or placing a colored scarab in an indentation.