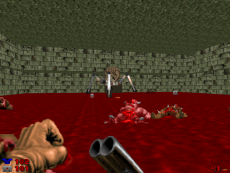 BOSS is a single level wad including a TITLEMAP shown instead of the main screen. It's about a player accessing through the map normally meeting two custom bosses. One is encountered as Sub-Boss and the another is the final boss.

You start in a room that is empty (furniture was removed of that room) near a base for marines. A marine was looking to a water view but suddenly imps spawn and kill him. You wonder what was that (text displayed). You search the room but you'll encounter a mirror. You see from that mirror that water had became lava and monsters are teleporting to the earth. Then the player starts playing.

It's only for one player with no deathmatch starts. 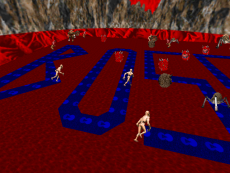 BOSS used an older TITLEMAP which showing monsters fighting each other, but now it's replaced with 4 Cyber-demons.